Last april, 17th 2012, I took part in the TEDxBuenosAires2012. Ana Patiño, from the Buenos Aires Herald had a little chat with me. Here is what we talked about.  [NOTA: Aquí una copia traducido (automáticamente) al español]

‘The real success of the 15M is that it changed people’s minds’
By Ana Patiño, BuenosAiresHerald.com staff. 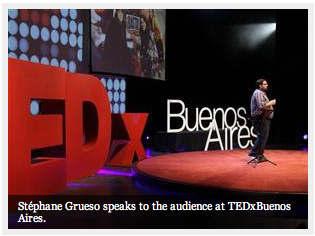 – Spaniard Stéphane Grueso assured that a new way of protest has appeared after the Tahrir, 15M and Occupy Wall Street movements, and despite their “little” concrete achievements, the change in the people’s minds has showed that it is in fact a success.

Although there have been protests all along History, Grueso affirmed that “what happened last year is special,” regarding the three main motives that triggered the worldwide demonstrations that began in the Arab Spring, continued at Puerta del Sol last May and lead to the Occupy movement in Zucotti Park by the last quarter of the year.

He told the BuenosAiresHerald.com that what has led people in Madrid to gather at Puerta del Sol was the local context, that “we were all living a crisis, without work, without expectations;” the fact that “there was not a unique ideology and everybody was invited to be part of it;” and also the global context. “The movement has spread not like a virus, but like waves,” he assured during the TEDx Buenos Aires, “it was like music, we were merging.”

The Spaniard highlighted six main points in common between Tahrir, the Indignants, and the “99 percent,” including the fact that they all gathered in public squares surrounded by important buildings, the horizontal organization which has no leader, the role in information and communication technology and the non-violent protests.

He also mentioned the “copyleft,” action that he describes as the “documentation and sharing of what’s happening,” giving transparency to the movement and leaving it in the internet so everybody can have access to it. The movements are currently organizing the 12M (May 12) protest that will be a massive global march as the 15-O (October 15), and Grueso has called on Argentines to participate in it. “I am aware that you passed through a similar situation in 2001, but you are not alone now,” he said.

Grueso assured that they are frequently asked why they allowed the right-wing party to win the November 20 elections in Spain, and stated that “we are focused in other things and have other deadlines, we want to change things, but we are not anti-system.”

“I know that something is going to happen, I can tell you that, but I don’t know when,” Grueso stated as he strongly assured that the most important thing they have achieved is the change in people’s mind and that means “we’ve already won.”

p.s. you can find the original article here.